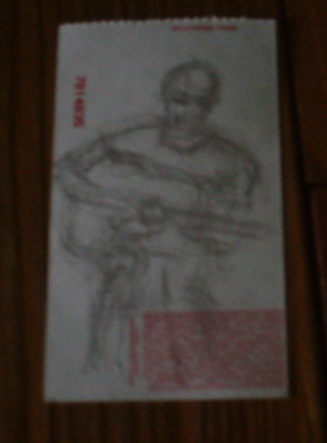 I saw Jay Brannan at World Cafe Live in Philadelphia last night.  At first we had to stand since there is very limited seating but a couple left after the second song of Jay’s set and I quickly moved in. Sitting there, listening to him sing, I wished I had brought my sketch book. All I had was my ticket, they didn’t even have paper napkins at the table. I know the photo sucks but I wanted to share it anyway. After the show Jay Brananna stood by his table to sell CDs so I went up gave him a hug, thanked him for the great show and showed him my drawing. He said it was really good 🙂 If you never heard of him, you should check him out in the movie Shortbus or look at some videos

This entry was posted on August 25, 2010 by amyrims. It was filed under drawings .